Ask not what you must do for your gadget

The most important thing to know about the new $229.99 Echo Show, an Alexa speaker with a screen, is what it doesn't do. You basically never need to tap the screen for anything, unless you really want to. There is not an "app store" where you hunt around for new things to add to your screen. It sits on your counter, answers your questions, sets your timers, and occasionally displays useful information. That's it, and that's great.

Adding a screen to the speaker must have created a sore temptation for the product people at Amazon to ladle on more features and apps on top of what the Amazon Echo, Echo Dot, and Tap can already accomplish. Instead of doing all that, Amazon appears to have focused on getting the stuff that already works on the Echo to work with a screen. Alexa is a platform now, and the Show is an attempt to build out that platform rather than glom another one onto it.

The Echo Show is a character study in gadget restraint.

The restraint extends to the physical design of the Show itself, which straddles the line between "unassuming" and "plain." The 7-inch touchscreen sits atop a flat speaker grille on a flat angle, all set inside a wedge-shaped casing. I suspect Amazon was going for something inoffensive, something that could become invisible in your kitchen. It very nearly accomplished that, but the looks are a little too utilitarian for my tastes.

The Show beats Amazon’s other Echo devices on sound quality, but it doesn’t compare to a Sonos system

Inside there are two 2-inch speakers that are capable of producing sound that's both louder and richer than what you'll get from a regular Echo or a Google Home. But, of course, the Show doesn't sound nearly as good as a high-end speaker like a Sonos Play:1. For basic listening — having something on in the background while you're cooking, for example — it's more than fine. For $230, I think Amazon could have done a little better here, though.

The key difference between this and other smart speakers is, of course, the screen. My colleague Dan Seifert likens it to the tiny kitchen television / radio boxes that once hung underneath many of our cabinets. The Show can serve a similar purpose: giving you easy access to music or TV that's just on in the background as you go about cooking or doing the dishes.

For a grizzled gadget head like me, however, the Echo Show reminds me of the old dream of the "Information Appliance," which Walt Mossberg wrote about back in March. If you look at early attempts at kitchen gadgets that provide ambient information — like the 3Com Audrey and the Chumby gadget that came later — they're pretty easy to make fun of. I mean, just look at this amazing video from a local news station around 2007:

The problem with these home appliances were twofold: first, as Walt rightly points out, they lack an intelligent assistant that can suss out a wider variety of needs with just your voice. Second, they simply tried to do too much, given the computing capabilities of their time.

The Echo Show obviously solves the first problem by including the very capable Alexa smart assistant. I've been bouncing between Siri, Google Assistant, and Alexa quite a bit lately, and while there are very clearly places where Alexa can be a little harder to figure out, for the vast majority of things I think to ask it does the right thing. The fact that it has a few more abilities is also nice; it's the only assistant that can control my Roomba, for example.

As for the second problem, that's where Amazon has shown remarkable — and admirable — restraint. Anytime you see a touchscreen, you also usually also see an entire operating system and an app store that goes with it. But that’s not true of the Echo Show, which smartly relegates the screen to secondary importance.

The Show displays information related to whatever you're asking, shows video when you explicitly ask for it, and cycles through some basic information like your next calendar appointment. By refusing to put a traditional app store on this thing, Amazon is setting our expectations for it, and therefore the Show feels like it exceeds them instead of disappointing.

Although Amazon has done a pretty decent job of filling out its app store for its Fire tablets, that store can't hold a candle to what's available on the main Google Play Store, and it definitely disappoints when compared to the iPad. Rather than set itself up for a losing battle of expectations against those stores, Amazon is simply sidestepping it.

That will hopefully force developers to make apps (or, in Alexa's parlance, skills) that feel native to this device. If there were a whole Android system on this, developers would probably just port over whatever they'd made for Android phones onto it. And that would have made for a crappy experience. Imagine trying to navigate this device with your hands covered in cake batter.

Until now, we kept both an old iPad and an Echo in our kitchen. There are advantages to just having a regular ol' iPad instead of this new Echo Show, mostly that you can get to a vastly larger array of more powerful apps. But old iPads (and even some of the newer ones) don't respond well to hollering "Hey Siri" from across the room, and their interfaces demand that you touch them with your dish soap-covered hands.

You don't have to worry about that with the Echo Show, but you also have to accept a much smaller set of things you can do. All of the skills I've set up for Alexa already work here, even though most haven't yet been rewritten for the screen. Helpful prompts pop up suggesting the keywords I should use with them, and Spotify shows album art, too.

Yet, all too often I would tap on the screen expecting something to happen, but nothing did. Yes, this is a touchscreen, and yes, there are a few skills that let you interact with your fingers, but it's primarily meant as a display, not an input device.

Furthermore, there are very few skills out there that really take advantage of the screen. Ask Alexa to show you a weather radar, and it can't. You can watch YouTube and Amazon Prime video while you cook, but no such luck for Netflix. Amazon has managed to get way more skills for Alexa than anybody really expected, so now it needs to repeat that accomplishment with the Echo Show. More skills need to take advantage of this screen to truly justify the upgrade.

I tried asking the Echo Show to give me directions, and the best it could do is tell me how long it thinks it'll take instead of showing a map I could send to my phone. Hilariously, if you phrase the question as "how long will it take to get to X," Alexa will take a shot and then say "As I don't know your speed I can't tell you how long it will take." I am pretty sure that the speed of the Echo Show is almost always going to be zero miles per hour.

There is one new feature on the Echo Show: video calling. It worked well in my tests, at least between two Echo Shows. There's also a feature called "Drop In" which lets you video chat without asking the other person to accept the call. It starts with a subtle chime on the receiving end and displays about 10 seconds of translucent fog before the call begins. It sounds creepy, but so long as you only share it with trusted family members, it hopefully won't be abused (and Amazon is aware that it needs tools to help prevent harassment).

Unfortunately, we weren't able to test the full functionality yet. When it launches, you'll be able to call phones that have the Alexa app installed and vice versa. But we were able to test Echo Show to Echo Show calls, and they worked well. You can talk from across the room without issue. Sadly, the camera on the Show doesn't handle backlighting well at all, and it's angled up slightly so children will have to jump up on a chair if you have it on your kitchen counter.

"Dropping in" also works just as I described, connecting you immediately and showing video without asking permission. So yeah, don't turn on Drop In for anyone but your closest family and friends. It is, fortunately, disabled by default.

Amazon figured out something special with the original Echo: most gadgets that require you to think about them place a cognitive burden on your life. You have to charge your watch, you have to figure out the best phone app for syncing your notes, you have to re-learn multitasking on your tablet, and so on.

The Show doesn’t ask anything of you

Not so with the Echo Show. When you're not using it, it doesn't ask anything of you. Sure, there are hassles when you can't remember that exact right keyword, but they tend to go away once you learn them. Even though you can't do everything you might want to, you don't really expect that from an Echo. Instead, the Show does little things like giving you a helpful screen that lists your timers so you don't have to keep asking after them.

Are there things I don't love about the Echo Show? Of course. I think it's pretty homely and I think that the sound quality could be better for the price. But the improvements over the original Echo are big enough that it's my favorite smart speaker right now.

From nearly any other company, adding a screen would have resulted in feature-itis of the worst kind. By holding back, the Echo Show feels like it does more. Its strength is in its simplicity.

Our review of Amazon Echo Show 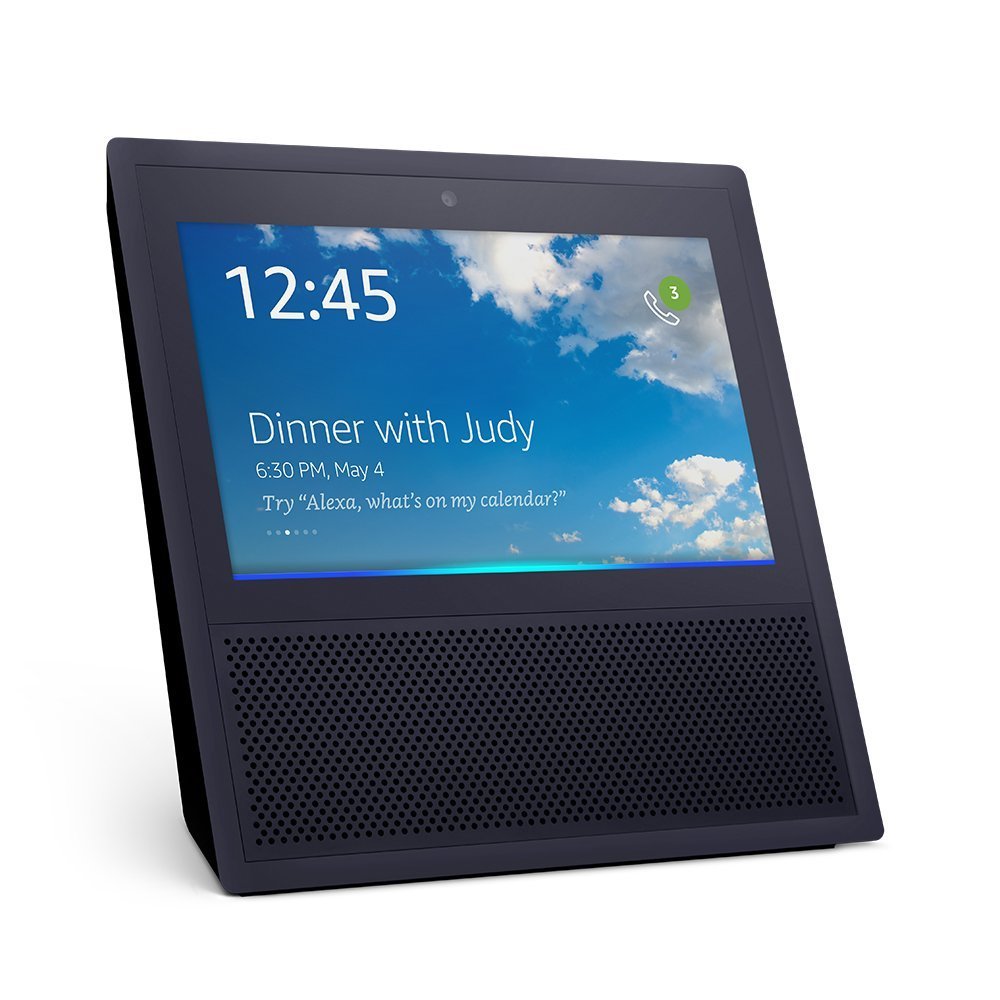