Before attempting to answer that, let me say this: I love music, be it delta blues, beat jazz, Detroit electronic, or hard driving rock-n-roll. It’s a mood thing. And I’ve been streaming wireless music around my house for more than a decade. My adventures in wireless audio began with some interference-prone 900MHz speakers weakly riding an FM signal. Those were replaced with a set of amplified speakers attached to a Bluetooth 1.1 adapter kit which I later replaced with an AirPort Express in 2004. Four years ago I was treated to wireless music nirvana with a multi-zone Sonos system that I recently enabled for AirPlay. The Sonos is nearly always on, sometimes for critical listening, sometimes for the after dinner family dance party, but more often than not it’s just music in the background. I’m no audiophile. Hell, I can’t even play an instrument (though I’ve purchased a few to assuage my shame). And you know what? That’s ok, I’ve come to accept my position in the fat chewy center of the consumer audio market. So, how does Libratone stack up? Read on to find out. 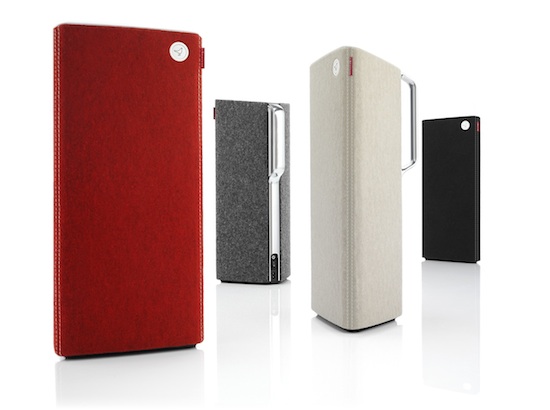 You’ve likely never heard of Libratone. Fair enough. But maybe you’re familiar with Steinway Lyngdorf Audio, the Danish company that specializes in high-performance professional audio? Jes Mosgaard, the former CEO of Lyngdorf Audio and former CTO of Steinway Lyngdorf, is now with the 10-person Libratone organization in its quest to deliver professional-grade audio to the slightly-soiled masses. Remember the name because Cupertino’s taken a liking to Libratone with plans to showcase the Danish company’s AirPlay speakers in Apple’s physical and online stores.

My first encounter with Libratone was in Berlin for IFA 2010. I was immediately impressed with the quality of its wireless tower but troubled by the need for a 30-pin dongle to wirelessly stream audio from iOS devices. Remember, Apple had just announced its wireless streaming technology dubbed, AirPlay, three days earlier making Libratone’s dongle-based Beat speaker obsolete before it even shipped (though I’ve been assured that sales are good).

Here we are, almost a year later, and we still only have a few AirPlay speakers on the market. Oh sure, several were announced from Klipsh, Philips, and iHome, but you’ll be hard pressed to find anything other than B&W’s Zeppelin Air to purchase. As to JBL’s overpriced $350 On Air dock, puhlease — B&W and Libratone’s offerings are in a whole different class. 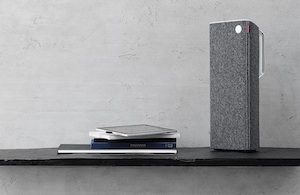 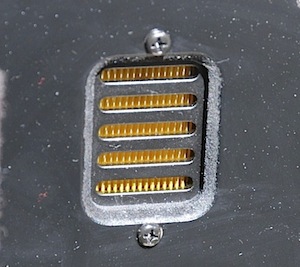 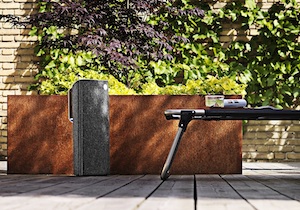 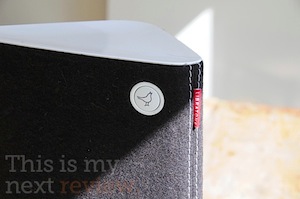 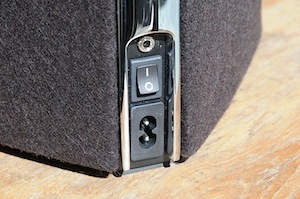 That brings me to the Libratone Live. It’s essentially last year’s Libratone Beat updated with a BridgeCo chip to enable wireless audio streaming over Apple’s AirPlay protocol — no dongle required. The Live also got a bump to 150 watts, with five dedicated amps powering a 5-inch bass unit, a pair of 3-inch midrange drivers, and a pair of 1-inch ribbon-based tweeters all arranged around the triangular circumference for 360-degree sound. 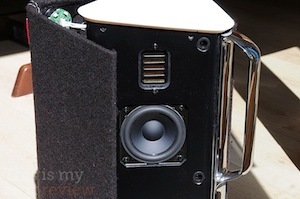 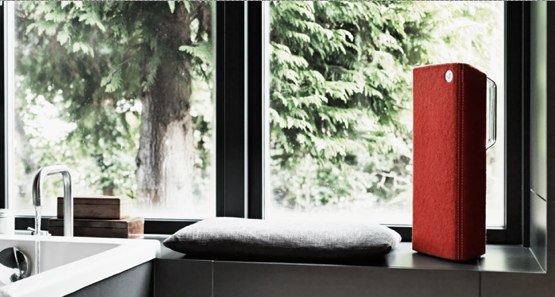 I listened with the Live in two typical positions: first on a table about 3 feet (1 meter) from the wall and then again sitting on a knee-high bench nearly touching the wall. The bass reflection in the second case was intense. In either placement, the audio sounded equally rich regardless of my listening position in the room. To further enhance the experience, Libratone will provide a universal iOS app in September letting owners manually correct the audio based upon the speaker’s location. Mind you, this isn’t equalization, it’s an adaption of the sound system to the acoustical characteristics of the room. The iOS app can also be used to apply future firmware updates to the Live and Lounge. Kristian Kroyer, Creative Director at Libratone, said that Mac and Windows PC apps are also coming sometime in the future.

As to the sound, well, I was impressed — very, very impressed. It easily bested the smaller Sonos S5 Play:5 system I used as a reference. The 47 x 19.5 x 15 cm (18.5 x 7.7 x 6 inch) / 6.5 kg (14 pounds) Libratone Live simply provided more power over more range to better the Play:5 in raw thump, clarity, and room-filling music. Of course, The Libratone Live is also $300 more expensive than the Play:5, but at least you’re getting what you pay for. Assuming you paid $699 for the "slate grey" base model — the "blood orange," "vanilla beige," "blueberry black" and "lime green" models come swaddled in cashmere for an extra hundred bucks. Hey, audio dealers (and Libratone) love an up-sell.

Our review of Libratone Live 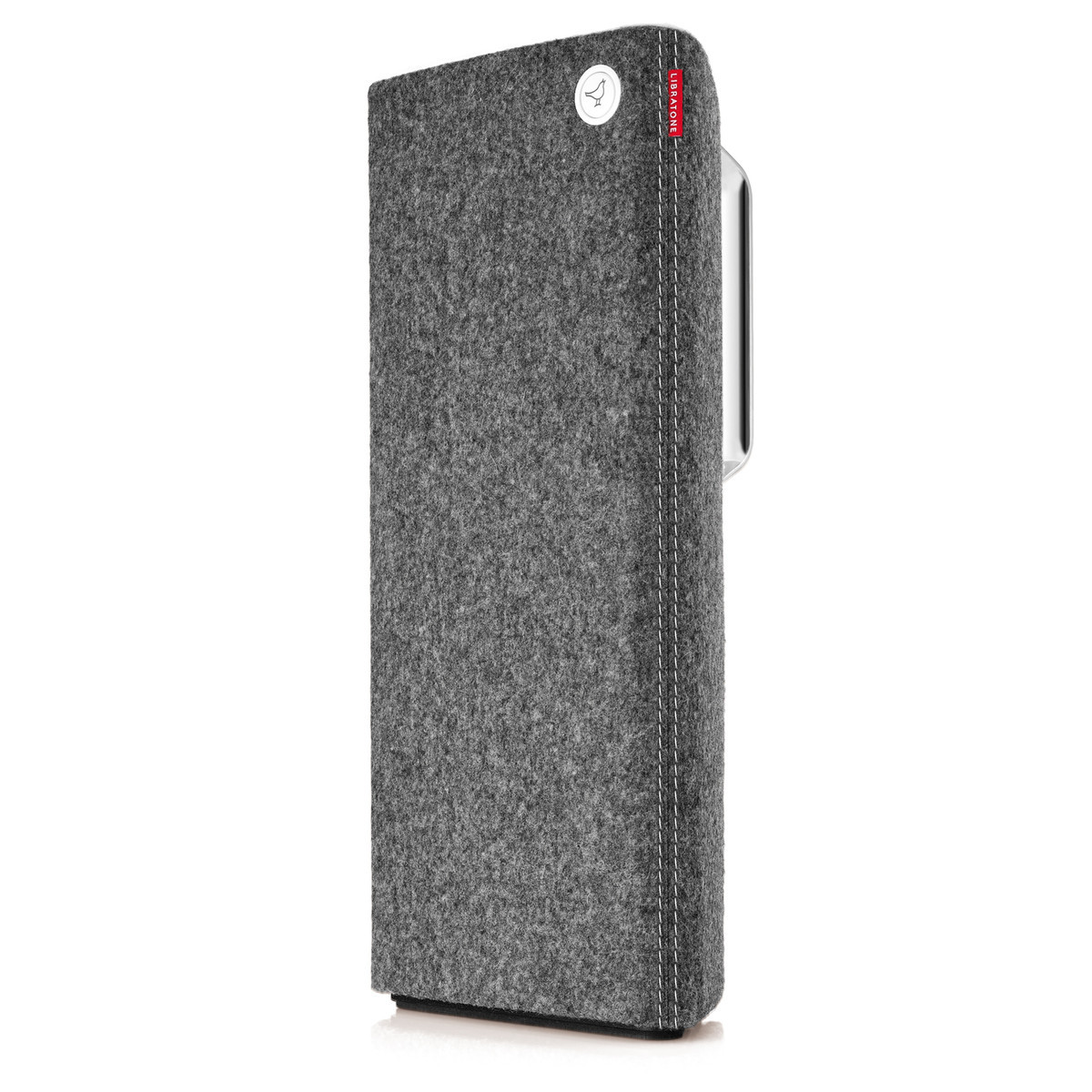 So, will I be swapping out my Sonos for these Libratone speakers? No, but I’m a home owner with multiple listeners, music collections, and streaming audio services to manage. While the Libratone Live speaker ($699 or $799 for the cashmere finish) does best the audio reproduction of my relatively diminutive $399 Sonos Play:5 all-in-one, it can’t compare to the quality of sound and features offered by two Play:5 speakers ($798) joined together in a stereo pair. And now that Sonos has introduced its feisty little $299 Play:3 wireless Hi-Fi units, well, for my money Sonos provides more flexibility and more value for the home than any available AirPlay speaker, Libratone included.

I can, however, wholeheartedly recommend the Libratone Live AirPlay speaker to any iOS or iTunes user itching to fill an urban space with some serious wireless sound, especially if you already own an AirPlay-enabled receiver or Apple TV. Yeah, the Libratone Live is expensive, but the audio delivered is commensurate with the price. The only shipping AirPlay speaker boasting similar acoustic specs is the aggressively designed $599.95 B&W Zeppelin Air. It’s $100 cheaper than the Live and you get a 30-pin dock, remote control; and jacks for USB and Ethernet. As always, you need to give the Libratone Live a listen for yourself before handing anyone your hard-earned cash — a task made easier with the Libratone Live headed to your local Apple store in September.